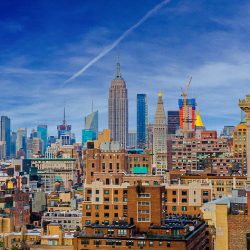 New York offers various attractions that highlight everything that the city can offer from culture to architecture, finance, and art. Although these attractions are a must see for anyone intending to visit New York it doesn’t capture the entirety of what the city has to offer. Here’s a quick list of the lesser known places to visit when you happen to drop by New York.

5 Off the Grid Places to Visit in New York City

The painted pieces of the Berlin wall can be seen in various places in New York (5 in total) the most notable of which is situated in 53rd street near Madison Avenue.

For that pop culture fix the Hook and Ladder 8 fire station found in Tribeca was the fire station used as the headquarters of the Ghostbusters in the cult classic.

A serene escape from the fast paced lifestyle of the city Greenacre Park hosts a variety of foliage plus an enchanting 25 foot waterfall.

A landmark showcasing what New York City architecture has to offer. This landmark expresses a medieval feel that is sure to stand out amidst the tall buildings of the city.

A place where history meets innovation, the NYSCI was built for the 1964 World’s fair and currently holds various exhibits and displays that are both interactive and informative.

There are a lot of off the grid locations and hidden attractions that can be found in the tapestry of culture which is New York City. A way to further enjoy the depth of the city is to ask locals about locations or attractions aside from the usual must-see’s of New York.