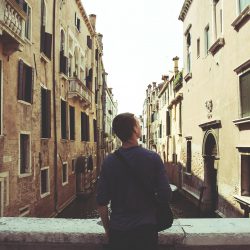 How many times have you watched a movie and thought “I’d really like to go there.” or “I REALLY need to travel.” Sometimes we need a little inspiration to spark that wanderlust in us. We’ve gathered movies to inspire your’s and given you reasons why you should watch our movie picks. Check it out!

Liz Gilbert (Julia Roberts) is a modern woman on a quest to marvel at and travel the world while rediscovering and reconnecting with her true inner self in Eat Pray Love. At a crossroads after a divorce, Gilbert takes a year-long sabbatical from her job and steps uncharacteristically out of her comfort zone, risking everything to change her life. In her wondrous and exotic travels, she experiences the simple pleasure of nourishment by eating in Italy; the power of prayer in India, and, finally and unexpectedly, the inner peace and balance of love in Bali. Based on an inspiring true story, Eat Pray Love proves that there really is more than one way to let yourself go and see the world.- Source: Sony Pictures

Traveling to Italy, India and Bali even just through this movie will ignite that wanderlust in you. The amazing backdrop and scenery in the movie will you have you booking your ticket.

A young man and woman meet on a train in Europe, and wind up spending one evening together in Vienna. Unfortunately, both know that this will probably be their only night together.- Source: IMDB

Meeting new people is basically the essence of this movie and where else would be perfect than in a train in Europe? It’s about taking chances and going for it.

Under the Tuscan Sun

A writer impulsively buys a villa in Tuscany in order to change her life. Source: IMDB

Sometimes a new place is the answer. Tuscany, is one hell of a place to start anew. Luscious, gorgeous and beautiful, this gives you unending inspiration to just pick up and go.

Twenty-something Richard travels to Thailand and finds himself in possession of a strange map. Rumours state that it leads to a solitary beach paradise, a tropical bliss – excited and intrigued, he sets out to find it. Source: IMDB

Thailand has some of the most beautiful beaches. The Beach features Phi Phi Island near Phuket. Though the once perfect island was ravaged by a terrible tsunami it has now recovered and is once again pristine.

This is a romantic comedy set in Paris about a family that goes there because of business, and two young people who are engaged to be married in the fall have experiences there that change their lives. It’s about a young man’s great love for a city, Paris, and the illusion people have that a life different from theirs would be much better. It stars Owen Wilson, Rachel McAdams, Marion Cotillard, Kathy Bates, and Carla Bruni among others. Source: Sony Classics

Midnight in Paris literally looks like a storybook of beautiful Paris City. One of the most visited and dreamt about destinations, the movie features Paris in the 1920’s and also shows us it’s modern beauty.

A young widow discovers that her late husband has left her 10 messages intended to help ease her pain and start a new life.Source: WB Shop

Though the movie starts off in New York, we follow the lead, Holly to the beautiful countryside of Ireland. We watch in awe and envy as she experiences traditional Irish life while taking in the luscious sites.

Sophie dreams of becoming a writer and travels to Verona, Italy where she meets the “Secretaries of Juliet”. Source: IMDB

One of the most romantic cities in the world, Verona, Italy is the setting for Letter to Juliet. We’ll get to travel to the bustling city of Verona but also see the famous wall where thousands of letters are left in the hopes of inspiring burgeoning love.

Corporate billionaire Edward Cole (Nicholson) and working class mechanic Carter Chambers (Freeman) are worlds apart. At a crossroads in their lives, they share a hospital room and discover they have two things in common: a desire to spend the time they have left doing everything they ever wanted to do and an unrealized need to come to terms with who they are.

Together they embark on the road trip of a lifetime, becoming friends along the way and learning to live life to the fullest, with insight and humor. Each adventure adds another check to their list.
Source: Warner Bros

Sometimes, it takes dire circumstances to achieve our goals especially visiting dream destinations. It’s not likely we can just leave at the drop of a hat so we watch as Edward and Carter travel all around the world checking off their bucket list.

In Nancy Meyers’ The Holiday, a romantic comedy from the director of Something’s Gotta Give and What Women Want, two women trade homes only to find that a change of address can change their lives. Iris (Winslet) is in love with a man who is about to marry another woman. Across the globe, Amanda (Diaz), realizes the man she lives with has been unfaithful. Two women who have never met and live 6000 miles apart, find themselves in the exact same place. They meet online at a home exchange website and impulsively switch homes for the holiday. Iris moves into Amanda’s L.A. house in sunny California as Amanda arrives in the snow covered English countryside. Shortly after arriving at their destinations, both women find the last thing either wants or expects: a new romance. Amanda is charmed by Iris’ handsome brother Graham (Law) and Iris, with inspiration provided by legendary screenwriter Arthur (Wallach), mends her heart when she meets film composer Miles (Black). Source: Sony Pictures

Have you ever wanted trade places with someone? Well, today you can trade houses at least. In The Holiday, Iris and Amanda switch it up and live in each other’s houses not realizing they’ll also be living a bit of the other’s life.

Bob Harris (Bill Murray) and Charlotte (Scarlett Johansson) are two Americans in Tokyo. Bob is a movie star in town to shoot a whiskey commercial, while Charlotte is a young woman tagging along with her workaholic photographer husband (Giovanni Ribisi). Unable to sleep, Bob and Charlotte cross paths one night in the luxury hotel bar. This chance meeting soon becomes a surprising friendship. Charlotte and Bob venture through Tokyo, having often hilarious encounters with its citizens, and ultimately discover a new belief in life’s possibilities.

Shot entirely on location in Japan, Sofia Coppola’s Lost in Translation is a valentine to the nature of close friendships and to the city of Tokyo. Ms. Coppola’s film, from her original screenplay, contemplates the unexpected connections we make that might not last – yet stay with us forever. Source: Focus Features

Japan has so much to offer and one of those is the natural yet robust culture they have and constantly are perfecting. Lost in Translation not only has a beautiful story but it has an amazing backdrop.