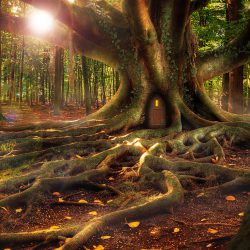 Treehouses are structures built around, next to or among the trunk or branches of one or more mature trees while above ground level. They are every children’s dream and over the years, the concept of treehouses have changed from a kids playground to something as modern as suites and restaurants. Here are some of the world’s most fascinating treehouses:

We often see a single-storey treehouse but in Canada, they have three-storey which can be found in The Enchanted Forest in British Columbia, Canada. The treehouse is the major attraction in the place and the tallest treehouse in British columbia.

Standing at 100 feet, this structure is said to be the tallest tree house in world. It was built entirely out of reclaimed wood by Horace Burgess in Crossville, Tennessee USA.

This restaurant in Auckland, New Zealand, started its construction in 2009. This chrysalis-inspired treehouse is designed to be weather-resistant and is able to host up to 18 guests at a time.

Treehouse for Birds and People

This modern tree house concept by Nendo is a 78-room bird apartment where human visitors get a peek into the lives of birds. This is a work of a 35-year old Japanese designer, Oki Sato and is located in Andu Momofuku Centre, Japan.